Sponsors Showed Their Community Pride with a Centennial Banner 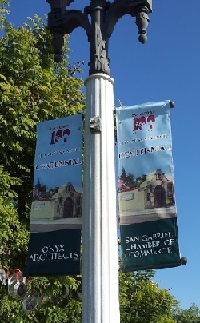 More than 80 Centennial banners were up and on display to celebrate San Gabriel's 100th anniversary.

The banners, made of high quality durable material, were manufactured by Dekra-Lite. 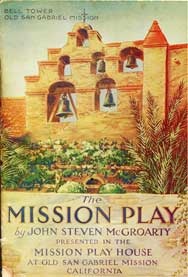 If you're a fan of Southern California history, you may well remember the legendary pageant that was the Mission Play. Performed for more than 2 million people between 1910 and 1945, the original Mission Play was a four-hour performance including an hour-long dance sequence.

The original Mission Play by John Steven McGroarty was a bold attempt to tell a story that had nearly been forgotten. It became a theatrical spectacle portraying real and fictional episodes from the history of the California missions.

Our "re-envisioned" Mission Play was adapted by a diverse creative team that included Mission Playhouse staff, professional writers, artists and other partners.

The Mission Play 2013 revisited memorable moments from the original play, but also examined the original story from other perspectives neglected in the original, from the points of view of the original Tongva tribes, to those of today's San Gabriel citizens who have inherited a rich and complex historical legacy.

To learn more about the project please go to any of these great links: 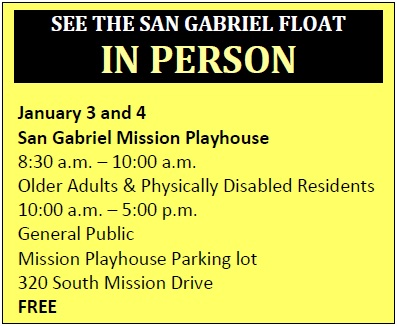 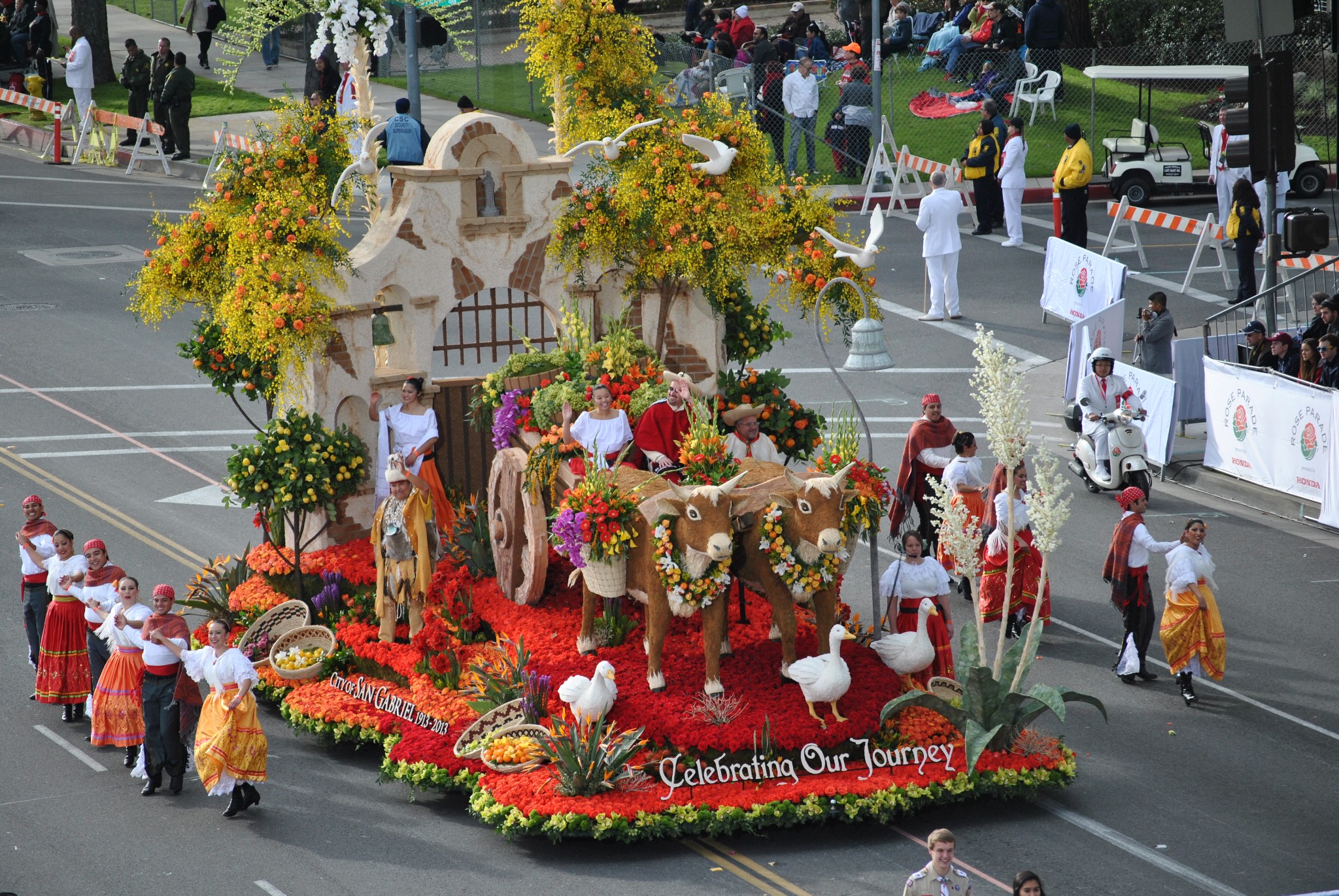 More than 400,000 packed the parade route as the San Gabriel float made its turn at the corner of Colorado Boulevard and Orange Grove, with an estimated 100 million viewers worldwide. A host of City and Centennial leaders were present to watch the float as it made its appearance.

Parade officials announced the parade's top float awards shortly after 6:15 a.m., and the results were picked up from the Tournament's website and transmitted to the Centennial Committee just after 6:45 a.m.

Fulfilling a decades-old dream to return San Gabriel to a parade it last entered in 1972, the float project was conducted by volunteers under the direction of the Centennial Executive Committee, co-chaired by Mayor Kevin Sawkins and San Gabriel Historical Association President Mary Cammarano. Direct development and oversight was provided by a committee headed by Pam Petievich and Parks and Recreation Director Rebecca Perez. An all volunteer fundraising effort headed by Centennial Sponsorship Chairman Mario De La Torre raised the more than $155,000 needed to complete the float without any City financial subsidy.

San Gabriel's float was also notable because it represented the premiere appearance at the parade by its newest float builder, Paradiso Parade Floats. Paradiso founder Charlie Meier was featured, along with the San Gabriel float, in a feature length profile in the Los Angeles Times (attached), as well as in stories appearing on KTLA-5, in the Pasadena Star News and San Gabriel Sun.

There were moments of drama as a smaller-than-expected contingent of volunteers braved near-record low temperatures to decorate the float, causing a race to finish the float as it was being rolled out of its tent. As the float proceeded to its judging position on Seco Street at 2:30 p.m. New Years Day, Paradiso staff and volunteers raced to complete the finishing touches needed for the judging.

Centennial leaders including Executive Committee members Mary Cammarano, Ellie Andrews, and Steve Preston appeared to cheer the float during the rollout. When the judges completed their final review - marked by the ringing of a bell - the audience broke into spontaneous applause. Charlie Meier, founder of the firm, shed some tears as the float successfully passed its final test. 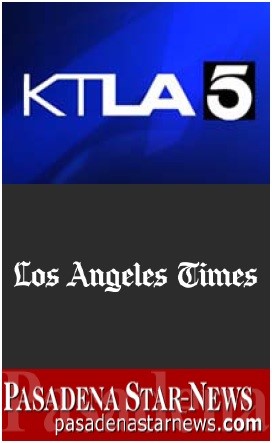 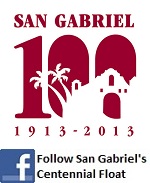 Many San Gabriel residents choose to sit back with a mug of hot cocoa and watch the 2013 Tournament of Roses Parade, presented by Honda®, get underway from the comfort of their living rooms. Live broadcasts of the Rose Parade were televised throughout the dayat the following locations: 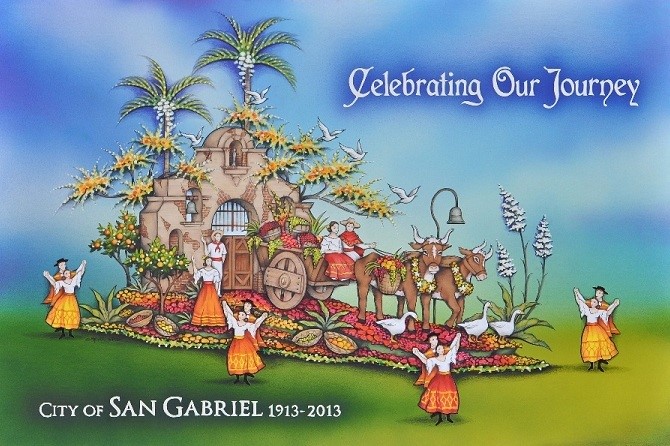 More than 150 members of the public were on hand for the unveiling of San Gabriel's Centennial Float, the city's first Tournament of Roses Parade® entry in 40 years.

Titled "Celebrating Our Journey", the float depicted a vibrant harvest celebration. The elegant Spanish-style architecture of San Gabriel's Grapevine arbor framed the design while oxen draw a cart overflowing with grapes to the winepress. Baskets patterned after Tongva designs cradled lush arrangements of produce and flowers. The surrounding landscape bloomed with fanciful flowering trees, citrus and agave while thousands of roses in sunset hues carpeted the float's base.

Colorful folk dancers performed alongside. While honoring San Gabriel's rich history, the design also reflected on how the city has grown and continues to grow. San Gabriel's centennial Rose Parade® float was designed by Charles Meier and was built by Paradiso Parade Floats. Participants were encouraged to donate to the float project, by visiting the Donations page on our newly redesigned city website.

To view the orignal request for donation please go to: donations.


History on Display The Sequel


The free event were held under the 150 year old grapevine located at 324 S Mission Drive.

Participants also had an opportunity to 'adopt a rose' that would ride down Colorado Boulevard on January 1 on board San Gabriel's first float in the Tournament of Roses© Parade in 41 years!

To learn more, download the original flyer promoting all of the exciting events.

San Gabriel's participation in the 2013 Rose Parade was secured when the Tournament issued a final invitation letter to San Gabriel to participate in the legendary parade.

With this critical step completed, fundraising and float design moved full speed ahead. Only days later, the Centennial Steering Committee voted unanimously to award a contract and begin discussions with the selected firm to develop the design that incorporated the results of design contest held the year before.


The public is invited to look back at the city's history and learn more about our Centennial with a visit to the San Gabriel Historical Association Museum 546 W Broadway (open the first Saturday of each month 1 pm - 4 pm or by appointment at (626) 308-3223).

Admission is free. Displays focus on the city's history including the Mission Play, citrus industry, and schools.


During our Centennial year, residents made some significant donations to the Museum.